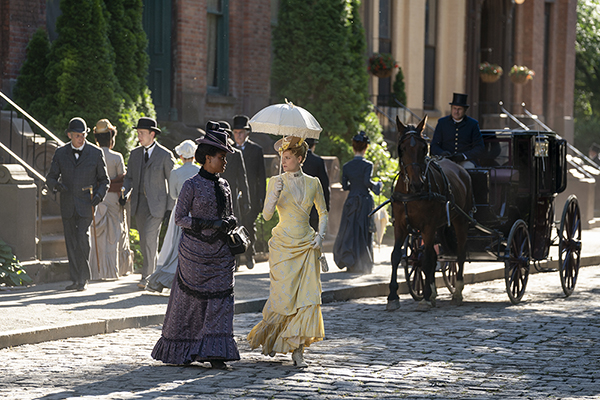 Photo credit: Alison Cohen Rosa/ HBO
TOMORROW, Tuesday, March 1, 2022
6:00 – 7:00 p.m.
Via Zoom
Production Designer Bob Shaw and Location Manager Lauri Pitkus will join Lorna Nowvé, Interim Executive Director of the Historic Districts Council, and Rachel Levy, Executive Director of the Friends of the Upper East Side Historic Districts, as they explore the extensive research and challenging logistics involved in bringing Gilded Age New York City to life.
We will discover how the magic of moviemaking led to the creation of some of the series’ exquisite locations and other behind-the-scenes secrets.
Registrants will receive a special link to watch episodes 1-4 online, courtesy of HBO. (Your email address will not be used for HBO marketing purposes.)
$20 Seniors and Friends of HDC / $25 General Admission

Created by Julian Fellowes, HBO’s The Gilded Age begins in 1882 with young Marian Brook (Louisa Jacobson) moving from rural Pennsylvania to New York City after the death of her father to live with her thoroughly old money aunts Agnes van Rhijn (Christine Baranski) and Ada Brook (Cynthia Nixon). Accompanied by Peggy Scott (Denée Benton), an aspiring writer seeking a fresh start, Marian inadvertently becomes enmeshed in a social war between one of her aunts, a scion of the old money set, and her stupendously rich neighbors, a ruthless railroad tycoon and his ambitious wife, George (Morgan Spector) and Bertha Russell (Carrie Coon). Exposed to a world on the brink of the modern age, will Marian follow the established rules of society, or forge her own path?

Bob Shaw was nominated for an Oscar in Production Design for The Irishman. He has received Emmy awards for his work on Mad Men and Boardwalk Empire, and numerous Emmy nominations for The Sopranos, Pan Am, and Too Big To Fail.

Lauri Pitkus’ extensive career as a Location Manager includes work on Orange Is The New Black, The Undoing, The Goldfinch, Nurse Jackie, The Post, Pan Am, and Ocean’s Eight.

Because New York’s Future
Should Include Its Past.

©2023 Society For Clinton Hill. Branding and website by Arch Digitals.